It has taken a lot of concerted effort for me to learn to spend money on quality fashion items.

It’s hard to explain…mainly because I don’t fully understand it myself.

For some reason it simply comes much more naturally for me to spend a significant sum of money on an old, rare, out-of-print book or a piece of original artwork by Matteo Scalera than a gorgeous 100% leather holdall.

However, I have learned through experience now that the price tag attached to these items comes with an unspoken guarantee that these items will last a lifetime.  In short, they are worth the money.

The first brand that I spent more than £100 for an accessory on was Jack Spade. They were my gateway brand.
The brand may be familiar to those of you in the USA; however, outside of the USA, it is relatively unknown.

I can think back now and remember clearly what it was that convinced me to part with my hard-earned cash (I was employed as a music manager at this time, so all cash WAS hard earned to say the least). I was sat on a train to Edinburgh  and a fellow commuter flashed by me … and his dark-grey briefcase caught my eye. 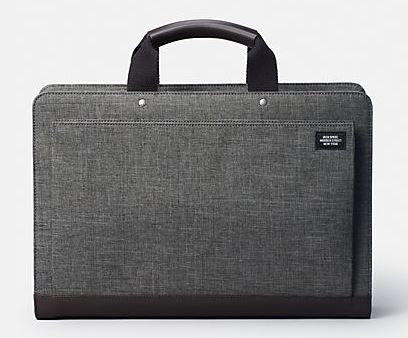 From a simple glance I could see the quality of the product and the attention to detail yet simplicity of the design.

I knew in that instant that I needed to own it.

How did I know?
…because in that quick flash as the stranger walked past I managed to both read and remember the brand name.

Jack Spade create timeless pieces, consisting of quality components.
High quality with beautiful style… but a reasonable price tag.
They are the type of brand I would expect to see regularly in Esquire magazine if you added £100 to the price tag of each item…

Kate Spade: New York is an American fashion design house founded in 1993 by fashion power-couple Kate and Andy Spade. The company initially started selling mainly woman’s handbags, but now have also branched out to include a full women’s clothing line.

Jack Spade is the name for the Kate Spade brand’s line for men.

Jack Spade, is an entirely fictional name, inspired by the couples’ two idols – Beat novelist Jack Kerouac and business titan Jack Welch. They believed the combination of these two idols were the perfect fit for a company which aimed for art and commerce to comfortably co-exist.

From their initial offering of men’s bags – accessories followed – and now Jack Spade offer a full clothing line. However, in recent years, the brand has featured designs by guest designers and is no longer the sole creative output for the marital dream-team.

I am still very attracted to the designs of the organisation, high quality leather goods that let everyone know you have a classic, effortless style. However, I also love the family aspect to the organisation. I have a strong affinity to family, it is very important to me.

There’s a reason menswear is consistently going back and revisiting the classic styles; Jack Spade deliver this in abundance.